Does Santa Claus Favor the Wealthy? 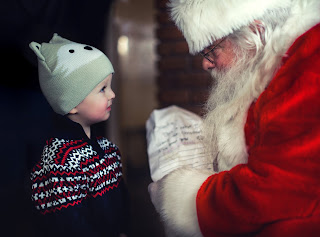 Does Santa Claus Favor the Wealthy?

As you probably know, Santa Claus, Kris Kringle, Father Christmas, isn’t totally a fictional character who was born and lives at the North Pole.

Although he may bear little resemblance to the original, the “real life” Santa Claus was a Greek bishop named St. Nicholas who lived in the third and fourth centuries in the country now known as Turkey.

Who cares about the origins of our jolly gift-bearing friend (probably not your kids), and why should we care?

The history of St. Nicholas and his transition to our modern day Santa Claus is increasingly important in our materialistic world that sees children requesting $400 hoverboards and video game systems from  this jolly old man who has the magical ability to construct such things in his workshop without regard to cost.

Mom can’t afford it? No problem, send it off in your letter to Santa, he’s got your back.

As parents we see the obvious flaw in this logic, but how do we navigate this with our kids without spoiling the magic of Christmas focus on what Santa will bring?

One option certainly is to teach your child from the beginning that Santa is a fun story, but in reality, mom/dad are the ones paying for all those “Santa” gifts under the tree.

Of course that option won’t appeal to many parents, and there is something to be said for allowing our kids to be kids and live in the land of make believe for as long as possible.

There are two potential problems with the Santa Claus myth that we’ll tackle today. First is the possibility of unreasonable expectations from your own child.

Second is the risk that some children may be left feeling they must have been naughty rather than nice when they compare their loot with that of their peers.

How Did St. Nicholas Become a Gift-Giver?

Knowing the history of St. Nicholas may help you explain to your kids that the purpose of Santa Claus is not just to grant their every wish.

A fierce defender of church doctrine, St. Nicholas was the subject of much persecution and become associated with many miracles that led to his reputation as protector of the disadvantaged, including orphans and prisoners.

Two stories from St. Nicholas’ life led to his reputation as a bringer of gifts.

In the first, St. Nicholas is said to have saved three young girls from a life of prostitution by secretly delivering three bags of gold to their father for use as their dowries.

Another story tells of St. Nicholas entering an inn where three young boys had been murdered. Sensing the crime, St. Nicholas resurrected the young victims, earning him the title of patron saint of children.

Okay, neither of these stories is too appropriate for retelling to your children, but you can turn them into “kid-friendly” versions and talk about how St. Nicholas miraculously saved children, and gave their families money to keep them together and happy.

Painting Santa as a version of a real-life saint whose purpose was to help those in need can reframe him from the magical genie who exists to grant their every wish, as he is basically portrayed modern day.

Santa Traditions in Your House

In addition to giving your children a fresh look at who Santa really is through stories of his history, it also helps to establish traditions around Santa Claus that don’t involve just receiving gifts.

They may not even realize it, but kids enjoy experiences as much if not more than they do things.

Your kids will enjoy a yearly ritual of  helping to bake the cookies for Santa, or whatever your tradition is in preparation for his arrival.

They may want to do handmade gifts to leave him and the reindeer, or string popcorn together to make a path directing Santa from his entry point to the tree.

Let your kids use their imagination, and make Santa more about the experience of having a special, secret, unseen visitor, than about loading up on more toys than they’ll ever play with.

So what happens when Santa brings your little Johnny a $1000 iPhone and his friend Sally gets clothes and socks from Santa?

Or when the tables are turned and it’s your house that Santa’s “stiffed?”

Unfortunately you don’t control this in other households, so you may be left explaining that Johnny’s parents contributed to what was made out to be a “Santa” gift.

But you can do your part to curb any disappointments or feelings of being left out by making sure your Santa gifts aren’t the really good stuff.

If you are going to “go big” with some of your gifts, make those are from you and let Santa pick up the slack with smaller stuff.

This approach not only helps protect other children who are less fortunate or whose parents make different choices, it also lets your children appreciate how hard you’ve worked to provide them with something nice and special.

The Moral of the Story

There’s no right or wrong when it comes to the choices that you make. The important thing is just that you make conscious, informed choices.

Don’t let yourself get lost in the magic of the jolly old fat man with his bulging sack of gifts. Reality is much different, and the message you let the Santa experience send your child is important.

And as the Grinch discovered, maybe Christmas doesn’t come from a store. Maybe Christmas, perhaps, means a little bit more!

If you enjoyed this article, be sure to connect with Kids Party Characters on Facebook for daily updates that include our best tips for raising happy and healthy kids.

And whenever your next party is, head to KidsPartyCharacters.com today to take advantage of our 15% discount, or upgrade to the next level party package, when you put down your deposit this year.

Even if your party isn’t until next summer, you’ll lock in your 15% discount or higher package by putting down your deposit today at KidsPartyCharacters.com.