Why the Land of Make Believe is So Important for Children 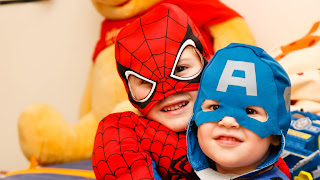 At Kids Party Characters, we obviously love the land of make believe.

We have over 200 characters waiting to show up at your child’s next party, which means we’ve covered just about every princess, pirate, and superhero your child could imagine, and more.

Every child loves characters, whether it’s dressing up and pretending they’re a certain character, or having the opportunity to meet their favorite character in real life and actually play with her.

One of the great things about characters is that they bring your child’s imagination to life.

They give her unlimited opportunities for creative play around different characters, the qualities they possess, and the lives they lead in the land of make believe.

But with so much focus on education these days, from preschools that brag about having rigorous academic training, to “My Baby Can Read” programs that can seemingly have your baby reading before she can talk, a parent can’t help but wonder how much time should be spent in the land of make believe.

The good news is, the evidence shows that pretend play in the land of make believe is actually crucial to your child’s early learning and life-long development.

To put it simply, play should be the young child’s version of academic learning.

Today we’ll look at some of the reasons why.

Executive functioning in the brain is responsible for tasks like self-regulation, planning, organizing and achieving goals.

Strong executive functioning is obviously desirable no matter what stage you’re in or what you decide to do with your life.

Several researchers have studied the correlation between pretend play and development of executive functioning in preschool aged children.

While it’s hard to establish a solid causal relationship between the two, the studies overwhelming show a correlation between executive functioning ability and the level of pretend play a child engages in.

For example, one study showed that a child’s ability to see objects as having various pretend functions, such as a block being used for building or as a pretend piece of pizza in a play kitchen, was highly predictive of the child’s executive function abilities.

Another five week study did show a direct causal relationship between fantastical pretend play and development of executive function.

If that’s all a little too scientific for you, just go with this takeaway — pretend play enhances development of skills such as memory, focus, self-regulation, persistence in the face of failure, and management of long-term projects.

When you watch children playing imaginatively together, you’ll notice how much communication goes on among them to live out the story.

Pretend play helps your child develop language and communication simply because they’re constantly engaged in both while playing.

Pretend play also helps your child develop emotions and empathy for others by walking in another’s shoes, and thinking about how it feels to be the person whose role she's playing.

Playing superhero, for example, can teach your child the satisfaction that comes with helping others when she uses her special powers to save the day and defeat the bad guys.

Pretend Play is the Cornerstone of Creativity and Imagination

Pretend play naturally presents your child with an endless number of different scenarios that require her to use logical reasoning and problem solving.

Deciding what or who to be, what game to play, what’s needed to play the game, and how the story will all play out taps into the same cognitive skills your child will use in situations throughout her life.

The abstract nature of pretend play also helps your child form memories of how to react to different scenarios and problem solve challenges that come up during his play.

Basically, your child is developing skills for navigating the world as he grows older.

And the more practice he has at this while he’s young and not clouded by the way things are “suppose to be” with the world, the more he’ll learn to use his imagination and discover creative solutions.

Pretend play comes natural to your child, so it’s really no surprise that it’s your child’s first and best teacher.

Encouraging your child to live in the land of make believe is the best thing you can do for him to prepare him for whatever he decides to do with his life as he grows up.

At KidsPartyCharacters.com, we bring the land of make believe to you with characters who are always the life of the party.

We have packages that include all the extras such as face painting, balloon artists, and cotton candy.

To choose the characters and package that are best for you, visit us at KidsPartyCharacters.com, and connect with us on Facebook to learn more about how we can put the magic in your child’s next party.